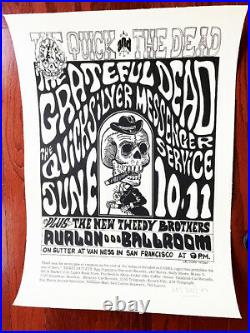 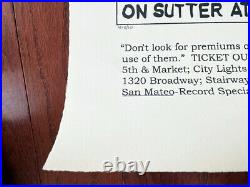 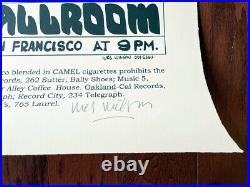 Available is an Officially licensed 2007 (Rhino Entertainment) Family Dog lithograph concert poster for the Grateful Dead appearing with Quicksilver Messenger Service at the Avalon Ballroom in San Francisco during June 1966. The Art was designed by Wes Wilson who has also Hand signed this Artist Proof. Rhino issued 500 signed and numbered Lithographs but the one you will receive was one of Wes's personal 50 Artist Proofs. It is #28 of 50. The image is # 12 in the Family Dog series and it represents the first time that the image of a skeleton was used in connection with the Grateful Dead.

It's also famous for its pun on "The Quick and The Dead, " which plays off the Quicksilver Messenger Service and the Grateful Dead appearing together at the Avalon Ballroom. The Size of this Litho makes the Art truly Mind Blowing in person. The late Wes Wilson was considered the Godfather of the Psychedelic Poster and I had the opportunity to spend some time with him some years back.

I also befriended his daughter Karen and this Lithograph has been in her family possession for years. Wes signed it and many other of his posters for her. It will come with a Letter of Authenticity from Karen. Auctions must be paid within 2 days of close.

Powered by SixBit's eCommerce Solution. This item is in the category "Entertainment Memorabilia\Music Memorabilia\Rock & Pop\Artists G\Grateful Dead\Posters". The seller is "vulcangas" and is located in this country: US.

This item can be shipped to United States.