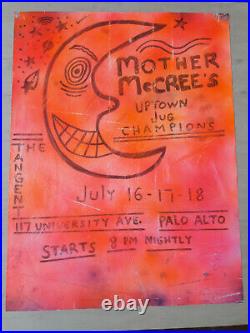 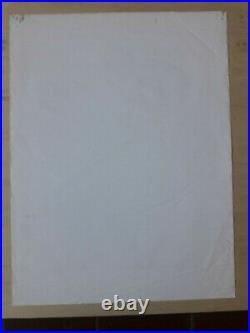 I'm Considering Offers on a variety of extremely rare Grateful Dead Acid Test memorabilia. This is the ONLY one known.

(See bottom of page for my 100% Lifetime Guarantee of Authenticity) - This Artwork measures 18 3/4" x 25" and has a couple of small issues. A couple small side tears, less than 1 each. Overall, everything is intact and presents excellent. Its a very large and bright piece of artwork. I hate to let this one go, but if the right person comes along, who it is meant for, then I give it a blessing in its new home.

This is truly a "once in a lifetime" chance to acquire a very important piece of pre-psychedelic folk history, that is sure to increase in value over time. This was one of Jerry Garcia's first bands ever.

A little more on this piece - When the collection was first uncovered, I was doing investigative research to attempt to determine the provenance of these pieces and who may have created them. Due to a mistake on my part, I came to the conclusion that Jerry Garcia MAY HAVE made some of these items.

The reason for this is the following: One of the first pieces to turn up from the collection was a small poster for the very first Acid Test, at Ken Babbs house. I sent this image to Babbs, and he wrote back "That looks like something I might have drawn". Only 3 months later, I got a crayon on wax paper piece of art, that was the prototype for the small poster design.

Well, lo and behold, after 10 years of searching down the potential artists of these pieces, I met up with Sara Garcia, Jerry's first wife and she told me "Ken Babbs went by Captain Trips before Jerry did" - So, now I'm no longer of the opinion that they were designed by Jerry and there is no hard evidence for this at present. Its also unlikely that Jerry Garcia designed this poster or made it as artwork, BUT, I cannot be certain of this. Therefore, I make NO CLAIMS as to the author/artist of this piece. It could have been anyone. The poster artwork was originally collected by Harvey Pollard, in the Menlo Park area, during the Mid 1960's. That's all the information I have, along with a signed letter by him, before he passed.

This is a Great Investment Item. Acid Test Posters and Handbills are the most collectable items of the psychedelia rock and roll period. Psychedelic Concert Posters are one of today's most solid investments. I'll be listing more items like these in the coming weeks ahead so stay tuned. This was the first lineup that comprised the center of what would later become the Warlocks, and eventually the Grateful Dead.

This is my good faith standing. I offer my word, unconditionally.

The item "ORIGINAL Mother McCrees Concert Poster ARTWORK Grateful Dead 1964 Only 1 Known" is in sale since Sunday, November 1, 2020. This item is in the category "Entertainment Memorabilia\Music Memorabilia\Rock & Pop\Artists G\Grateful Dead\Posters". The seller is "postertrip" and is located in Oakland, California. This item can be shipped to United States.