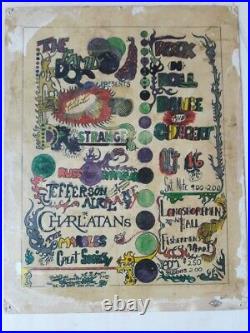 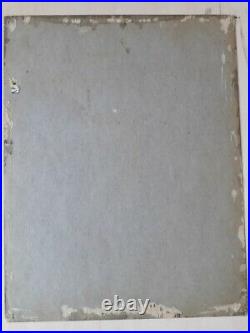 The artwork was Alton Kelley's design. There are only 3 of these that are colored in, known to exist and the other two were done by Kelley himself.

Measures 13 15/16" x 17 15/16" - The shellac that's on it may be able to be removed. Although some collectors who are particular about condition may outright reject a piece like this, I would argue the coloring gives it character, much more so than an average white uncolored piece.

Its certainly FAR more attractive to view on the wall than one which was never used for the event and never colored in. Nobody is going to take a nice mint one and color it in to make it look more attractive, so having one like this, is a real eye candy piece for the poster gallery. This should be in a museum, to be honest. This poster has tremendous value and importance. This has 100% provenance and came from Jeffrey's wife Shelly Muzzy.

This poster belonged to my first husband, Jeffrey Nolan, who lived in one of the very first communes in the Haight Ashbury at 408 Ashbury. I met him when I came to the Haight in 1966. He got this poster from that Acid Test advertised on the poster. Jeffrey colored it in and did the collage on the back, also layering some sort of sealer over it.

Jeffrey and I separated in 1973 and I moved to Washington State with our two daughters. I'm glad to see the poster again...

Jeffrey was one of the Haight Ashbury originals and knew all the major players from that time, Chet Helms and his brother, the Thelin brothers, the Dead, Big Brother and Janis, the Airplane. Jeffrey and Marty Balin were childhood friends and sang together in light opera in San Francisco. One of our close friends was the roadie for Big Brother in the 70's. We lived there in 1966 and all through'67. I came up from LA in'66, but Jeffrey was a player in North Beach with the beatniks, Ferlenghetti, Ginsberg, Bob Kaufman, Brautigan, et al, long before I came to San Francisco.

So your poster came from the original Acid Test, from an original hippie, before Herb Caen coined the name. I hope this has helped you..

Strange was the 1st Psychedelic Dance Concert in the bay area. Dancing had been pretty much outlawed, in small venues and the only place in town where it was allowed was the Matrix, where the Jefferson Airplane would sometimes play. So Chet Helms decided to put this event on, and the first three of these events preceded the first Family Dog Numbered Poster concerts.

This is a Great Investment Item. Acid Test Posters and Handbills are the most collectable items of the psychedelia rock and roll period. Psychedelic Concert Posters are one of today's most solid investments. I'll be listing more items like these in the coming weeks ahead so stay tuned. The item "Original Family Dog 1st Psychedelic Concert Poster Dr.

Strange Grateful Dead" is in sale since Sunday, October 18, 2020. This item is in the category "Entertainment Memorabilia\Music Memorabilia\Rock & Pop\Artists G\Grateful Dead\Posters". The seller is "postertrip" and is located in Oakland, California. This item can be shipped to United States.