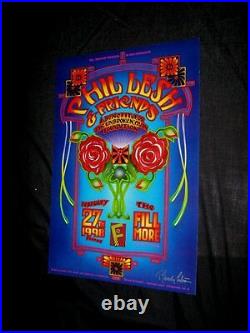 Be sure to add me to your favorites list. I got this poster from Randy when I had my store in Marin County. This is a first printing autographed by the artist Randy Tuten.

It is in near mint-mint condition. Poster and Handbill F # 317 - RT0417. Bill Graham Presents in San Francisco. PHIL LESH & FRIENDS: A Benefit for The Unbroken Chain Foundation.

When I designed this I tried to give it that classic 60's poster look. This marks the first time the Grateful Dead played in public after Jerry Garcia's death. I suppose I meant the two roses with rose buds to mean something... The whole shape of the poster looks almost like a jelly-fish with it's tenacles. Grateful Dead Productions printed some handbills/postcards using the same image.

If you have more questions about this item, please contact me at the following. In January 1969, after a year of being rejected as a poster artist by Chet Helms at the Avalon, 23-year-old Randy Tuten took his portfolio to the Fillmore where Bill Graham immediately hired him. Tuten was partial to traditional advertising styles, Graham was bound to receive his work as something considerably more akin to his own taste. Born in San Francisco, Tuten moved with his family to Los Angeles and grew into a rebellious teenager coming of age in the late fifties. Like Griffin, he was a self-taught artist who was into surfing and cartooning.

In junior high, he could be found seated in the back of the room decorating classmates' notebooks. While attending Los Angeles Valley Junior College, Tuten worked for the art department and regularly cut other classes in favor of hanging art exhibits in the college gallery.

In 1966, Tuten made a habit of hitchhiking back and forth between Los Angeles and San Francisco, soaking up everything that was happening musically at the Avalon Ballroom and the Fillmore Auditorium. Dropping acid became a highway ritual. I literally road tested the stuff after I picked it up in San Francisco. Hitchhiking back to LA in the middle of the night, I'd encounter all kinds of animals - bears, owls, wolverines, cows. At the time I wasn't sure if they were real or imagined.

All I know is they were definitely amongst me. During these visits to San Francisco, Tuten remembers catching a glimpse of Mouse and Kelley's posters.

That's what brought me to San Francisco for keeps. He reveals that it was the posters of Mouse, Kelley and Griffin that fueled his imagination and influenced his approach. I liked Mouse and Kelley's posters because they were so friendly to the eye. But Griffin influenced me the most.

The move to San Francisco in January 1967, making ends meet by freelancing as a graphic designer, until he got his break with Bill Graham in 1969. When he moved back to San Francisco, Tuten made the acquaintance of graphic illustrator Daddy Bread (Bill Bostedt). Tuten and Bread became close friends, and they collaborated on many projects, including some of the most famous rock posters, until Daddy Bread's death in 1998. Tuten remained in San Francisco until 1980 when, suffering from burnout, he moved up to Lake County.

He continued to produce for Bill Graham and others until he was struck by a debilitating stroke in early 1984. He produced no work in 1984 and 1985 while he struggled to recover, but, while he was in the hospital, Rick Griffin visited him and invited him to come down to work with him in Santa Ana once he had sufficiently recovered.

Tuten took him up on his offer and, starting in 1986, he made multiple trips to Santa Ana to work with Griffin. The artist related that unlike many of the poster artists before and after him, he made no conscious effort to translate emotional depth or personal or political conviction. His posters owe more to his skill as a draftsman and to his regard for the commercial art formats of American advertising. There really isn't any heavy meaning in my posters. What I did graphically was a combination of what I liked and what fit. Although Tuten's posters show considerable variety, his formats and lettering style generally reflect the influence of early 20th century product labels. Tuten's own taste, sense of proportion, and craftsmanship, along with the added influences of Mouse, Kelley, and Griffin, imparted new vigor to these conventional classical forms and produced a distinctive personal style. Randy Tuten is the only poster artist to span 5 decades designing for The Fillmore. He remains a prolific poster designer today, and still a regular producer for Bill Graham Presents and other promoters. Tuten's work has long been recognized for its seminal influence in the art of modern rock and roll, and has been featured in major museum exhibits as well as in several important book-length retrospective studies of rock art.

Though his work shows the influences of the 60's era, it has also evolved in recent years into an orderly and highly varied style of ornamental commercial art, often reminiscent of the advertising used in the deco era. The general consensus in the rock art community is that he has continued to grow as an artist and may be doing his best, most creative and exciting work at the present time. His posters are now a part of rock history, and for both curator and collector, will always be among the most desirable and telling artifacts of West Coast rock aesthetics. This item is in the category "Entertainment Memorabilia\Music Memorabilia\Rock & Pop\Artists G\Grateful Dead\Posters".

The seller is "kidrokmod" and is located in this country: US. This item can be shipped worldwide.