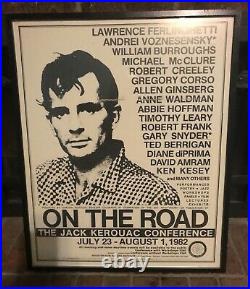 Vintage Jack Kerouac - On the Road - Conference Poster from the walls of the Naropa Institute back in 1982. All the heavy hitters from the BEAT GENERATION were scheduled to speak. Allen Ginsberg, Lawrence Ferlinghetti, William Burroughs, Gregory Corso, Ken Kesey and a few space travelers. Conference was held July 23rd to August 1st, 1982 on the occasion of the 25th Anniversary of publication of.

Custom Framed Poster in Good Condition - see my pictures. Framed Poster is 25 Tall. There is authentic scratch mark mid poster where I rolled the poster to abscond with it after taking it down from the.

And a bunch of the Denver crew, probably the #3 city in Beat history after New York & S. Including Justin Brierly (the catalytic source of the Denver Columbia connection, and who sounded exactly like Walter Cronkite when he talked), journalist Ivan Goldman, Ed Sketching White and Jim Poolshark Holmes, as well as a crew from the Denver Union of Street Poets including Les Reed, Padraic Cooper and Carolyn Reed. Plus the actors Paul Gleason. The Breakfast Club, Trading Places. Who hung with Kerouac in Florida in the early 60s and decided to become an actor only after seeing.

With Jack in a theater. And longtime Beat Max Gail. S Wojo, and Chief Bromden in various productions of. One Flew Over The Cuckoos Nest.

Invisible but ever-present photographer Chris Felver, and lots of filmmakers besides Robert Frank, like Janet Forman, John Antonelli, Richard Lerner & Lewis MacAdams, and Doug & Judi Sharples running around capturing it all, and Jerry Aronson who came up with his concept for. The Life and Times of Allen Ginsberg.

Oh and a little rock group you may have heard of, The Grateful Dead, were playing just down the road at Red Rocks for three nights, and roving ambassadors like John Perry Barlow and Mountain Girl were scouting Camp Kerouac and asking questions of the masters just like all the other students. It was every major Beat figure alive at the time, except Gary Snyder who was officially off building a zendo (a Buddhist meditation hall) in California, but history tells us hes long avoided these attention-getting Beatnik gatherings. And interviews reveal he never saw Jack again after their. Adventure ended in May of 56. But with his regrets he sent a nice letter to Allen saying, Jack Kerouac was the wandering scholar troubador storyteller youngest son of the Jack tales in us all.

The voice of the water going over the edge of the waterfall itself. And the other thing to remember is they were all so fuckin.

Other than 30 year old Jan, the youngest of them was still more than twice my age!! Babbs & Tytell were 43, Abbie & Ann Charters 45, Kesey & Joyce Johnson 47, McClure 49, Gregory 52, Allen 56 not that many of this crowd would ever live long enough to be doddering old folks, but they were what we now know of as in their mid-life prime. And while they werent necessarily producing their early ground-breaking poetry and prose, they had adopted the Cassady and then Kesey concept that your life is your art. They were, to a man and a woman, better.

Than they were in their explosive youth. Better performers, better teachers, better organizers, better tempered, better conveyors of their inner vision.

And at this event, thanks to the Bill Graham of the Beats, Allen Ginsberg, they were collectively staging the biggest Woodstock of Jack since he first played the Cavern in 57. The item "Jack Kerouac Conference On The Road Naropa Institute 1982 Event Poster" is in sale since Monday, February 19, 2018.