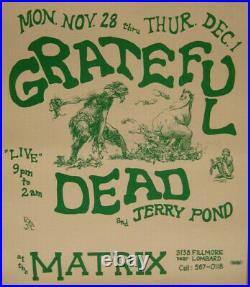 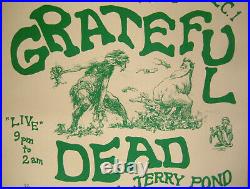 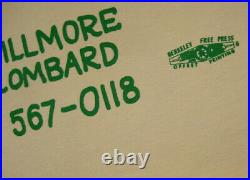 Nov 28-Dec 1 1966 Concert Poster. This is a very scarce Grateful Dead poster from The Matrix, a tiny venue that held around 100 people. The show dates were November 28 through December 1, 1966 and the poster was designed by RAL Cards, Etc. With a drawing by Heinrich Kley, and printed AFTER the show. The Matrix > 3138 Fillmore Street, San Francisco. The matrix opened in August 1965 to provide a place for the Jefferson Airplane to play! Marty Balin's father, Joe Buchwald, was one of the three backers. The Airplane rapidly graduated from the Matrix, of course, once they became famous, but in the mid-sixties the Matrix was the first club that encouraged hippie bands to play original music to hippie audiences.

The Fillmore and the Avalon were the top of the scene, certainly, but both those venues were generally only open on weekends. Within the confines of the local scene, there weren't many other places to play. Hippies weren't welcome everywhere, and the North Beach clubs had mostly gone topless and preferred bands who simply played Top 40 music to accompany the dancers, and didn't pay well at that. For longhaired bands on the rise in 1966, The Matrix was one of the few available gigs, and all the new bands played there on the way up. The Grateful Dead, for example, had played the Matrix in January of 1966.

The Matrix seated about 100 people, tops, and served beer and pizza. Dancing was against the law because of an archaic San Francisco ordnance involving Dance Permits'. As a result, fans went to the Matrix to sit and listen, so free-form blues jamming and other kinds of odd noodling was fine.

The Matrix generally booked a band and a folksinger from Tuesday through Thursday, and two bands on Friday and Saturday. Sometimes, groups who were popular at the Fillmore or Avalon would play weeknights at the Matrix because it wouldn't conflict with paying weekend shows around Northern California. KLEY - FEATURED IN ART OF ROCK BOOK, PAGE 162. MEASURES 14 7/8 X 17 1/4 VG+/NRMNT CONDITION.

I 110% assure you that this poster and all others listed are TRUE AUTHENTIC posters and are NOT cheap reproduction fakes! All questions will be answered within 24 - 48 hours. All posters are packed with the best of care.

The item "Grateful Dead THE MATRIX 1966 Concert Poster" is in sale since Sunday, October 4, 2020. This item is in the category "Entertainment Memorabilia\Music Memorabilia\Rock & Pop\Artists G\Grateful Dead\Posters". The seller is "theaustinvagabond" and is located in Pflugerville, Texas.