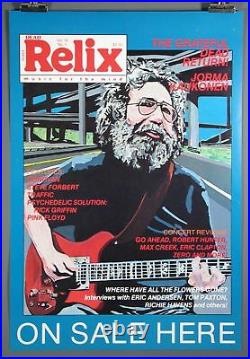 Grateful Dead's Jerry Garcia 1987 Highway Relix Poster. This vintage poster is an advertisement for the 1987. Rock's longest, strangest trip, the Grateful Dead were the psychedelic era's most beloved musical ambassadors as well as its most enduring survivors, spreading their message of peace, love, and mind-expansion across the globe throughout the better part of three decades.

The object of adoration for popular music's most fervent and celebrated fan following -- the Deadheads, their numbers and devotion legendary in their own right -- they were the ultimate cult band, creating a self-styled universe all their own; for the better part of their career orbiting well outside of the mainstream, the Dead became superstars solely on their own terms, tie-dyed pied pipers whose epic, free-form live shows were rites of passage for an extended family of listeners who knew no cultural boundaries. Here is a look back to the first Relix issue of 1987 Vol. 1, which reported on Jerry Garcia's return to the stage with the Grateful Dead in December 1986 following his coma earlier that summer.

[The article for this Relix Cover read as follows:]. The second half of 1986 was a trying time to be a follower of the Grateful Dead. Due to the well publicized health problems of the band, not much was going on.

Deadheads were pretty much left to their own resourcefulness attending shows such as Go Ahead, and trading tapes to fill the time. It is a great pleasure, therefore to relate the news that these trying times are over. The Dead's comeback shows in Oakland and related happenings will most certainly lead to renewed growth and strength for the immediate future. The air was electric outside the Oakland Coliseum on December 15, the night of the Dead's return to the concert stage. The rain that day did not damper spirits a bit as each deadhead in attendance anticipated answers to some important questions.

Has Bobby fully recovered from his accident? Will the band still be the same? Will the shows get shorter? Will the Dead ever write new songs?

In answer to the last question, strong rumors were rampant that the Dead were practicing heavily at the Marin Veterans Auditorium in San Rafael and that they were working on new songs. Another rumor held that the Dead would actually record an album at the same Marin Vets in early 1987 for a spring release. These thoughts only added to the anticipation as showtime approached. As the band took the stage, it became clear that Jerry had lost weight and looked great. The excitement grew and the questions became, What would the Dead open with? " Some reasoned "Not Fade Away, " certainly as appropriate choice, or "Gimme Some Lovin'" ("so glad you made it") but inevitably, and most fittingly, the Dead opened with "Touch of Grey, a song clearly with a lot of personal meaning to Jerry. As he sang the words, "I will get, by I will survive, " the crowd elicited its rousing approval.

The set would go on for 11 well executed songs. Immediately answering any questions about the band's health, stamina, and continued desire to keep this thing going full speed ahead. Part of this renewed effort was revealed in the set's third song, a new Hunter-Garcia piece, When Push Comes To Shove. " Outstanding versions of "Candyman" and "Let it Grow brought the long, excellent set to a close. The second set would introduce another new Hunter-Garcia tune, "Black Muddy River, " a song with a pace not unlike "Crazy Fingers, " This surge of creativity is most encouraging.

Who knows what success would come from an album at this point? A Grateful Dead produced, five record, Springsteen-like live set? This first night back was a kind of love affair between the group and fans and vice versa.

The second night somehow tried to exceed the good times of the previous day with a superb second set. "Box of Rain" and "Crazy Fingers" opened this set.

These two crowd pleasers led to "Estimated Prophet" and Eyes of the World. During drums, a third drummer appeared. A little later, three guitarists and a different organist came out and it became apparent, the Neville Brothers were making a surprise visit! "Willie and the Hand Jive" was the immediate segue from drums.

It was delivered meticulously and flowed into a manically-paced "Iko Iko" in which the energy was so high it was incredible. The ease with which the two groups meshed led one to believe they must have been practicing at Marin Vets together, and if so, could plan to record together as well. The possibilities are very exciting now, and one thing's for sure, the worries and waiting that marked the end of 1986 are over. All that one could have hoped for and more is coming true.

The Dead are back with a vengeance. With a spring tour imminent, and an album in the works, the world of the Grateful Dead is alive and vibrant again. Looking for a certain poster? This item is in the category "Entertainment Memorabilia\Music Memorabilia\Rock & Pop\Artists G\Grateful Dead\Posters".