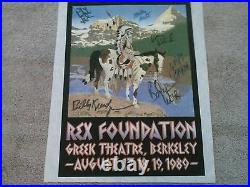 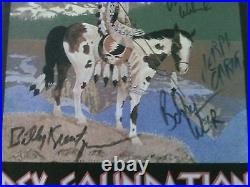 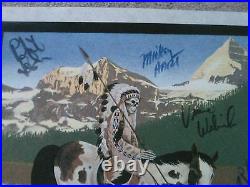 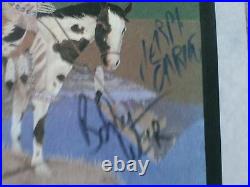 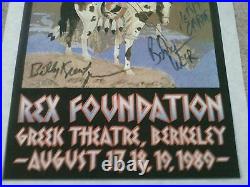 HAND SIGNED BY THE GRATEFUL DEAD , JERRY , BOBBY , PHIL, BILLY, MICKEY , VINCE. A PELON IS A PEICE OF FELT. THE THE PEOPLE WHO DO THE MERCHINDISE FOR THE TOUR WOULD USE TO TEST PRINT ON THEN SEND TO THE BAND FOR APROVAL OR NOT, VERY RARE. THERE WHERE ONLY 1 OR 2 EVER MADE.

IT HAS A COA FROM RAM ROD , HERES SOME INFO ABOUT RAM ROD IF YOU DONT KNOW WHO HE IS. He was a psychedelic cowboy who rode the bus with Ken Kesey and took virtually every step of the long, strange trip with the Grateful Dead. Known to one and all solely as Ramrod, he died yesterday of lung cancer at Petaluma Valley Hospital. "He was our rock, " said guitarist Bob Weir. Born Lawrence Shurtliff, he was raised a country boy in eastern Oregon and once won a county fair blue ribbon in cattle judging.

He got the name Ramrod from Kesey while he was traveling through Mexico with the author and LSD evangelist, at the time a fugitive from justice. "It fit him, " said Steve Parish, his longtime associate on the Dead crew. He used to keep us in line.

"I remember when he first showed up at 710 Ashbury, " said Dead drummer Mickey Hart. He pulled up on a Harley.

He was wearing a chain with a lock around his waist. He said'Name's Ramrod -- Kesey sent me -- I hear you need a good man.

I remember it like it was yesterday. Ramrod joined the Dead in 1967 as truck driver and was held in such high regard by the members of that sprawling, brawling organization that he was named president of the Grateful Dead board of directors when the rock group actually incorporated in the'70s. It was a position he held until the death of guitarist Jerry Garcia in 1995. Like the rest of the band's few remaining staff, he was laid off last year. He traveled the full length of the Dead's tangled odyssey, joining up with the band when the it first began playing out of town, about a year after the Dead got is start playing gin mills on the Peninsula.

Ramrod went to work setting up and tearing down the band's equipment for every show the Dead played. He puzzled his way through elaborate situations and circumstances: from the myriad psychedelic dungeons the band played through the'60s, to a concert at the base of the Great Pyramids in Egypt in 1977 to the baseball parks the Dead filled on the endless tours of the'80s and'90s up until Garcia's death. "He was always there, " said Hart, making sure everybody was taken care of. Hart said that it was Ramrod's practice to say "all right" at the conclusion of every performance as the band filed off the stage.

"I looked forward to those'all rights,' " said Hart. It was the way he said it. It was the tone that said it all --'it was all right... You couldn't fool old Ramrod. I was playing for him. Hart also remembered one New Year's Eve when he thought he might be too high to play. Ramrod solved the problem by strapping Hart to his drum stool with gaffer's tape. Hart recalled another show in San Jose with Big Brother and the Holding Company, where the starter's cannon the band used to punctuate the drum solo of St.

Stephen's went off early. "I looked back, " Hart said. His face was on fire.

He'd lost his eyebrows. You could smell his flesh. And he was hurrying to reload the cannon in time. That was the end of the cannons. A protege of Neal Cassady of the Merry Pranksters, the intrepid band of inner-space explorers who gathered around Kesey, Ramrod absorbed lessons from Cassady, a Beat era legend and model for the character Dean Moriarty in Jack Kerouac's landmark novel On the Road.

" "He knew Neal better than anyone in our scene, said Weir. He was a quiet, unflappable road warrior. Hart and fellow crew member Rex Jackson once decided to see how long it would take Ramrod to say something on a truck trip across the Midwest.

He said nothing through three states before speaking. "He was never a loudmouth, " said Parish. He was never anything but an honest, hard-working guy with a grip of steel and a hand that felt like leather. See my other auctions for more great movie, theater, and music concert posters, handbills, boxing style, photos, tickets, programs, books, family dog and fillmore other interesting memorabilia. I try to photograph items as best as possible.

PLEASE NOTE THIS JUST A HOBBY NOT A BUSINESS. PLEASE LOOK FOR MY OTHER ITIEMS THANKS.

These itiems are from my personal collection and does not grant you the right to copy or reproduce any of them. I UNDERSTAND AND THANKS FOR LOOKING AT MY ITIEMS. The item "GRATEFUL DEAD AUTOGRAPHED REX BENE TEST PRINTING CONCERT PELON FROM BAND RAM ROD" is in sale since Monday, March 2, 2020. This item is in the category "Entertainment Memorabilia\Autographs-Original\Music\Rock & Pop\Posters".

The seller is "bgfd287" and is located in Las Vegas, Nevada. This item can be shipped to United States, Philippines, Cayman islands.