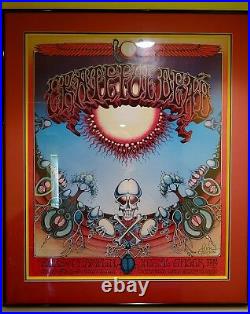 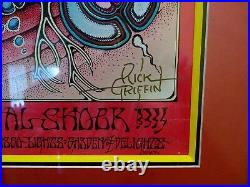 Offered here is a framed first printing of the infamous Aoxomoxoa poster signed by Rick Griffin featuring the Grateful Dead on January 24-26, 1969. The outside frame measures 26 1/2"x 31 1/2". The distance within the yellow matting measures 26 1/2" by 31 1/2". The matting overlaps the poster slightly to hold it in place. The only flaws that I can see are. I don't think that this one shows up in the picture. You can see these first three flaws. As noticeable and visible without zooming in. With the naked eye, you have to look for them to notice. This is one of my favorites; as well as the favorite of many. This framed copy is hanging in my home. This poster was used to promote a series of shows at the historic Avalon Ballroom in San Francisco (in the post-Family Dog era). These shows were presented by Soundproof Productions, and featured the Grateful Dead, Sons Of Champlin & Initial Shock.

Show dates were January 24-26, 1969. This truly iconic psychedelic image was designed by the late Rick Griffin, and is featured in "The Art Of Rock", plate 2.24. It was also used as cover art for the Dead's "AOXOMOXOA" album.

The title of the album is a. According to the audio version of the. Memoir, Living with the Dead (read by the author and former Dead co-manager himself), the title is pronounced "ox-oh-mox-oh-ah".

The words "Grateful Dead" on the front of the album, written in large, flowing capital letters, are an. That can also be read "We Ate The Acid" by covering the lower two-thirds portion of the name "Grateful Dead" combined with the very top third of the title. The artwork around the bottom edge of the album cover depicts several phallic representations.

Rick Griffin became famous for his psychedelic posters for the Avalon Ballroom and the Fillmore West in San Francisco during the late 60s. Jerry Garcia met him backstage at one of the bands concerts. The Dead hired Griffin and told him he could design anything he visualized, giving him total artistic freedom. They were confident hes come up with something they liked based on their love of his posters. According to Ida Griffin, Ricks wife the cover for Aoxomoxoa is a sufers paradise of sunshine, blue sky and life growing all around.

It was during this time in Ricks life that our second daughter was born. The cryptic skull and crossbones represented life and death in a circle of the sun, paradise, the Garden of Eden and planet Earth awareness. Rick would say the whole design was tribal. The lettering was based on an old English style that flowed into liquid edges, through the influence that water and the ocean had on Ricks life.

Should you want a cheaper alternative and are willing to accept responsibility, please contact me to discuss. Reimbursement will be for the cost of the item only. Feel free to contact me if you have any questions or need to see additional photos of the item and I will respond to the best of my knowledge. The item(s) are from a smoke-free household. Pictures are of the actual item being auctioned.

The item "Aoxomoxoa Framed First Printing Poster of Grateful Dead Signed by Rick Griffin" is in sale since Monday, May 11, 2020. This item is in the category "Entertainment Memorabilia\Music Memorabilia\Rock & Pop\Artists G\Grateful Dead\Concert Memorabilia".

The seller is "terry-dunn" and is located in Phoenix, Arizona. This item can be shipped to United States.