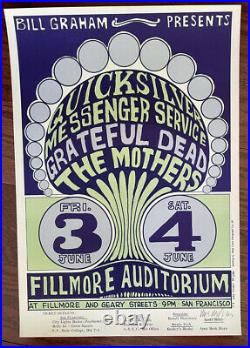 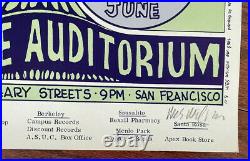 Available is a Wes Wilson Handsigned Psychedelic Bill Graham Fillmore Poster with an Incredible Provenance. The Poster was designed for a series of June 1966 shows that featured Grateful Dead, Frank Zappa and the Mothers of Invention and Quicksilver Messenger Service at the Fillmore Auditorium in San Francisco. This Poster is #9 in the Bill Graham series and is known as. BG9-RP-2 in Eric King's Current Poster Guide.

It is the authorized 2nd printing done shortly after the concert. The late Wes Wilson was considered the Godfather of the Psychedelic Poster and. I had the opportunity to spend some time with him. Some years back at Jorma Kaukonen's Fur Peace Ranch Guitar School in Pomeroy, Ohio for a Poster Exhibit and Concert. I also befriended his daughter Karen and this poster has been in her family possession for years. Wes signed it and many other of his posters for her. The Poster will come with a Letter of Authenticity from Karen.

The seller is "vulcangas" and is located in Ladys Island, South Carolina. This item can be shipped to United States.